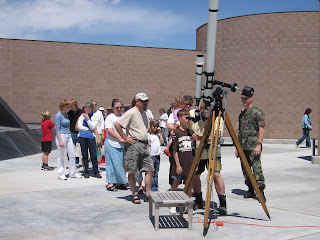 Visitors line up to take a look through Ray Martin's filtered solar telescope at the Summer Solstice Event in 2007.

After Wyoming’s long winter, it is worth celebrating the longest day of the year and the official beginning of summer. This year we will celebrate the start of summer a day early! Every year on the summer solstice (the day of the year with the greatest daylight when the sun reaches its most northerly position in the sky), a solar tube in the ceiling illuminates a silver dollar in the center of the Rotunda Gallery at exactly 12 o’clock, noon. Join us for this fun event, and to view the sun through astronomer Ray Martin’s filtered solar telescope which will be set up on the terrace.

The spectacular architecture of the UW Centennial Complex, which houses the Art Museum and the American Heritage Center, was designed by internationally-acclaimed architect Antoine Predock with a focus on its harmonious relationship with the land around it. Predock consciously incorporated forms, textures, and colors that would remind visitors of typical Wyoming landscapes. He selected an asymmetrical cone shape—an “archival mountain”—to house the AHC and a cluster of shapes—“a village” at the mountain’s base—for the Art Museum galleries, a juxtaposition that alludes to an early day campsite, a trapper rendezvous, or a prototypical Rocky Mountain town.

One of the more extraordinary features is the rotunda. Inspired by a kiva (a Pueblo Indian ceremonial chamber), this circular space is oriented to the compass points (the museum’s main hallway runs along an east-west axis) and has twelve blue glass slots at the top of the wall that suggest both a clock and the calendar. These details can be observed on any visit to the museum, but only at noon on the solstice do we see the sun illuminate the center of the rotunda.

Sol + stice derives from a combination of Latin words meaning "sun" + "to stand still." As the days lengthen, the sun rises higher and higher until it seems to stand still in the sky.
As a major celestial event, the Summer Solstice results in the longest day and the shortest night of the year. The Northern Hemisphere celebrates in June, but the people on the Southern half of the earth have their longest summer day in December.
- Chiff.com

Posted by University of Wyoming Art Museum 2 at 9:15 AM No comments:

This symbol can be found around the museum next to works of art. When you see this symbol, a cell phone audio tour prompt is available for that object. Enter the number next to it, followed by the pound key (#) to listen to the information.

Handouts for each audio tour at available at the museum's front desk, or can be printed at home following these links:

An audio tour is also available for Sculpture: A Wyoming Invitational, on view at the museum, around Laramie and on the University of Wyoming campus. Here is the link to the handout:
http://www.uwyo.edu/artmuseumimages/educationimages/sculptureaudiotour.pdf
Posted by University of Wyoming Art Museum 2 at 9:18 AM No comments:

Cell Phone audio tours are now available for two of the UW Art Museum's summer exhibitions: Adornment: Native American Regalia and Lia Cook: The Embedded Portrait. The cell phone audio tour is a new and free program at the Art Museum. Museum visitors can look for the above symbol, along with a prompt number, next to objects on view. By calling a Wyoming number (no long distance!) visitors can hear additional exhibition information from their cell phones. The number to call is 307-200-0040.

Next week, look for more audio tours at the museum, including for both Thomas Moran exhibitions currently on view.A cell phone audio tour is also available for Sculpture: A Wyoming Invitational, which is on view at the Museum, on the UW campus, and around the city of Laramie.
Posted by University of Wyoming Art Museum 2 at 3:23 PM No comments: 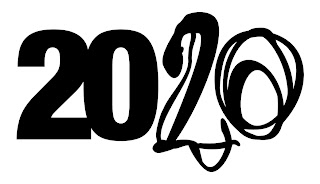 The first of three 20:20 events is tonight, from 6-8 pm at the University of Wyoming Art Museum. 18 artists and arts organizations from Southeast Wyoming are signed up for 20:20. They will each give a brief presentation of 20 images, each shown for 20 seconds. Those who will be presenting include local Laramie artists Joe Arnold and Linda Lillegraven, who in addition to her own work, will discuss the Touchstone Laramie project. Rawlins Main Street will also be presenting about their new gallery space. It's a great way to hear about and see the latest work and the latest projects in the region. 20:20 is free and open to the public. Afterward, come downtown to Altitude Chophouse and Brewery for drinks, food and a chance to continue the conversation and catch up with colleagues.

Future 20:20 sessions will be held for statewide artists and for art students.
Posted by University of Wyoming Art Museum 2 at 8:52 AM No comments: