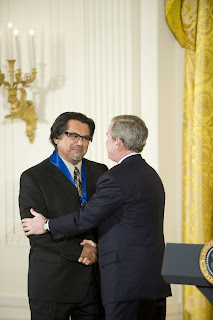 The 2008 National Medal of ARts was awarded to Jesus Moroles and presented by President Bush on November 17, 2008 in an East Room ceremony. Moroles was honored "for his enduring achievements as a sculptor of stone. His granite monuments grace America's landscape." The National Medal of Arts is a presidential initiative managed by teh National Endowment for the Arts. Photo by James Kegley for the National Endowment for the Arts.

The National Endowment for the Arts has announced that Texas artist Jesús Moroles has been awarded the National Medal of Arts. Moroles contributed two sculptures to the University of Wyoming Art Museum’s current public art exhibition, Sculpture: A Wyoming Invitational. Granite Windows which is located on Prexy’s Pasture is a new work created for the exhibition and Eclipse, located at the Art Museum, is from the museum’s permanent collection.

As the nation’s highest honor for artistic excellence, the National Medal of Arts was established by Congress in 1984, and is awarded by the President and managed by the National Endowment for the Arts. Nine medals were presented by the President and Mrs. Laura Bush in an East Room ceremony at the White House on Nov. 17. Award recipients are selected based on their contributions to the creation, growth, and support of the arts in the United States.

”With this honor, Jesus joins a select group of artists who have been recognized for their contributions to the creative and artistic life of our nation,” said Susan Moldenhauer, Art Museum director. “His selection for the National Medal of Arts award is well-deserved and we offer our enthusiastic congratulations to him for this achievement.”

For more than 30 years, Moroles has been creating large-scale public sculpture from granite. His studio in Rockport, Texas, is a family effort with his parents Jose and Maria, his brother Hilario, his sister Suzanna, and brother-in-law Kurt Kangas as integral parts of the Moroles Studio.

In 1982, Moroles received the prestigious Awards in the Visual Arts Fellowship for which his works were included in a two year traveling museum exhibition which originated at the Museum of Contemporary Art in Chicago, Ill.

Noteworthy large-scale works by Moroles include his 22 foot tall sculpture fountain, titled Floating Mesa Fountain for the Albuquerque Museum in New Mexico, environmental installation of 45 sculptural elements and fountains for the Birmingham Botanical Gardens in Birmingham, Ala. made possible by the National Endowment for the Arts, and Lapstrake, a 64 ton, 22 foot tall sculpture for the E.F. Hutton, CBS Plaza in New York City, located across the street from the Museum of Modern Art.

Sculpture: A Wyoming Invitational has been organzied by the UW Art Museum in partnership with the University of Wyoming, Laramie Parks & Recreation, Laramie Economic Development Corporation, and the Albany County Public Library. The exhibition continues through July 2009.

Posted by University of Wyoming Art Museum at 3:11 PM No comments: